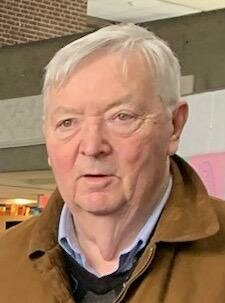 Please share a memory of Robert to include in a keepsake book for family and friends.
View Tribute Book

Robert was an undergraduate and graduate of Northeastern University, and retired as Captain in the Air force Reserves. Robert was a member of St. John's Episcopal church and the American Legion. He also served on the Board of Trustees of the Mountain Club on Loon, in Lincoln, NH, for over 15 years and on Summerset Place Condominium, in Duxbury MA, for several years.  He was also a past member of BNI.

He was a commercial banker for many years upon retiring in 1986 to start his own business. He was the perfect husband, father, Papa and brother....very caring and always put his wife and children above everything. He loved helping other people and lived his life through his own children and their children.

Robert is also survived by nieces and nephews.

Per his request, there will be no visiting hours and burial will be at a later date, and as Bob would say "Remember the dash -".

Memorial contributions may be made to Alzheimer's or Crohn's and Colitis.