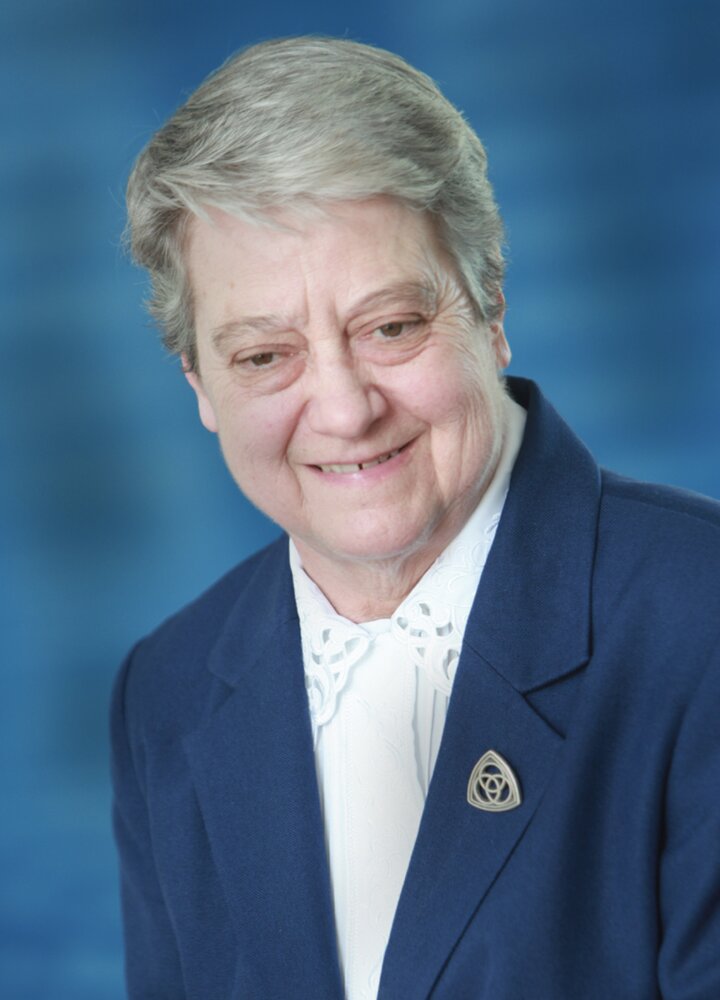 Please share a memory of Sister Mary Joan to include in a keepsake book for family and friends.
View Tribute Book

We commend to your charity the soul of our beloved, Sister Mary Joan Kerner. Who departed this life on January 1, 2023. In the fifty-seventh year of her religious life. Age: 80 years, 2 months, 1 day.

“But Mary treasured all these words and pondered them in her heart.” (Luke 2:19).

What more beautiful time and way could there be to enter eternity than on the Feast of Mary Mother of God? That was God’s gift to Sister Mary Joan Kerner last night. Surrounded by her Sisters who had been at her side all day, sometimes praying or sitting in silence, while at other times singing some favorite hymns, she peacefully took her last breath and went home to God.

Born on October 26, 1942, her parents John and Mary Kerner named her Ruth.  She was the youngest of her siblings and was pre-deceased by her sisters, Mary Kerner, and Ann Haddad. She is survived by her sister Jean Wolfe, and her brother John Kerner.  She is also survived by many nieces and nephews and their families.

Her home parish was Annunciation in Pittsburgh, PA, where she attended the parish school for eleven years, before transferring to a Benedictine School for her senior year and later graduated from St. Francis Nursing School. After graduation, she worked at Divine Providence Hospital in Pittsburgh. Niece of Sister Mary Florence Escher, the first Provincial of Our Lady Province in Kingston, MA, Ruth followed in her footsteps, entering the Community here in 1966. Following her canonical novitiate year, Sr. Mary Joan expanded her ministry to include working as a nurse at Carney Hospital in Boston, Jordan Hospital in Plymouth and later at the Pediatric Intensive Care Unit of St. Margaret’s Maternity Hospital in Boston. She later supervised some of the novices in their ministry experiences at Plymouth County Hospital.  Always open to a new adventure, she taught for five years at Sacred Heart Elementary School. When the Lourdes Center was built in Kingston, she became its first Director. Before the restructuring of our American provinces, Mary Joan was elected as a member of the ProvincialLeadership Team. In this capacity she evidenced a spirit of insight and wisdom, contributing in many and diverse ways. She served also as the Administrator of Providence House, where she was well-loved and respected by the staff. This was shown when theycelebrated her well-deserved retirement with a surprise party. She was one of the first recipients of the “Marie de la Roche Award” given to a Sister who was dedicated to the internal ministries in the spirit of Marie de la Roche.

Because Mary Joan worked often on the grounds of Providence House and as animal lover, she was usually accompanied by Winston a cocker spaniel and later by Dusty. For a time, she alsotended a chicken coop which housed about 30 chickens. In all kinds of weather, she would care for them and proudly collect their eggs. Thanks to her baking skills, many of these eggs ended up in some delicious coffee cakes! Her efforts added a real homey touch to Providence House. Before she became a part of the aging community in Providence House, Mary Joan, who was an excellent driver, knew the way to all the major hospitals in Boston. She drovemany Sisters to appointments there, while her calming presence keptall her “patients” at ease.  Devoted to St. Joseph, Mary Joan exemplified his spirit of loving presence to Mary and Jesus. We know that she is at peace with them now.

Share Your Memory of
Sister Mary Joan
Upload Your Memory View All Memories
Be the first to upload a memory!
Share A Memory
Send Flowers
Plant a Tree