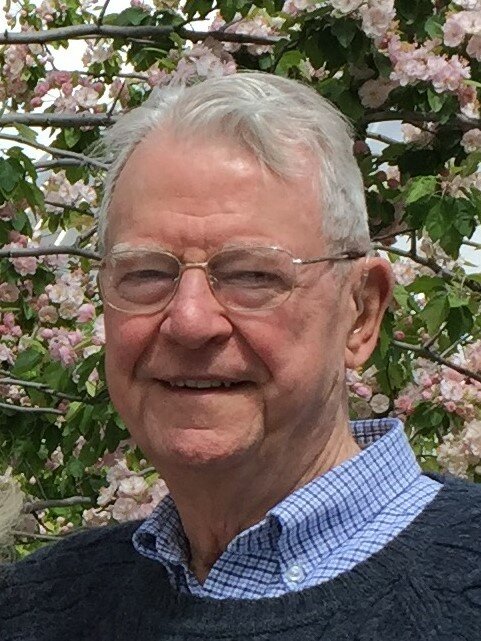 William John Hearn, Jr., business executive and loving husband of Dianne Battles Hearn, died unexpectedly on December 7, 2022.  He would have been 94 years old this Christmas Eve.

Bill was born in Hartford, CT on Dec. 24, 1928, to William John Hearn and Alice Moran Riley.  His family soon moved to Pittsfield, MA, and Bill grew up amidst the natural beauty of the Berkshires. Bill was president of his Pittsfield High School class for both his junior and senior years, graduating in 1946. He enjoyed returning to Pittsfield for class reunions for many years afterward.

Bill attended Yale University and graduated in 1950 with an Economics and Political Science degree. Bill loved his time in New Haven. He was a member of Saybrook College and Fence Club. In subsequent years, Bill and Dianne treasured their annual tradition of tailgating with Yale and Harvard alumni friends and cheering on the Bulldogs at the Yale-Harvard football games. The day always ended with Dianne and Bill hosting a dinner in their Duxbury home, with Bill in charge of collecting the $1.00 wagers and distributing the spoils to the winners.

The Korean War began in 1950, and Bill enlisted in the US Air Force. He graduated from Officer Candidate School and served for three years, including one year in Japan as a First Lieutenant in charge of air traffic control.  Bill was honorably discharged at the war’s end in 1953.

After returning home, Bill began his advertising and marketing career with General Electric Company in Schenectady, New York.  That same year, Bill rekindled a friendship with his future wife, Dianne Battles, at the wedding reception of a mutual friend.  They were married at St. Bernard’s Church in Waterville, New York on February 19, 1955.

In 1963 Bill accepted a management position with Instron Corp., Canton, MA. and the now five- member Hearn family moved to Duxbury, MA. Bill and Dianne soon became active members of St. John’s Episcopal Church and the Duxbury Yacht Club. Bill volunteered on the St. John’s Finance Committee and as a stalwart usher at the 8 AM Sunday service.  He also volunteered for many years with the Duxbury Yacht Club Tennis Committee. He and Dianne spent many happy summer afternoons overseeing various Member-Guest Invitational tournaments. One of Bill’s most meaningfulDuxbury volunteer experiences was his role as a trustee of the Partridge Fund; he was very proud of the many college scholarships awarded to numerous Duxbury students. In addition, Bill volunteered at various times with the Duxbury Art Association, Duxbury Recreation Department, and Duxbury Historical Society.

In 1972, Bill founded W.J. Hearn & Co., a marketing and public relations firm. He remained president of the company until his retirement in 2003.

In 2019, after living 46 years in their home on Meetinghouse Rd, Bill and Dianne moved to The Village of Duxbury. Bill greatly enjoyed the camaraderie and support he and Dianne found there.

A true romantic who once said his favorite movie was “Titanic,” Bill will be remembered for his devotion to his wife, the woman who for the sixty-seven years of their marriage remained forever beautiful in his eyes. During the fall, winter, and spring months, Bill’s nightly lighting of and tending to their home’s fireplaces served as a metaphor for his dedication to Dianne’s comfort and that of their children.

Bill had a wonderful sense of humor, delighting in jokes and word play even as other aspects of his memory began to fade. He greatly enjoyed tennis, playing in men’s doubles and mixed doubles groups for years. He also embraced the occasional golf game, reading thriller/mystery novels, playing bridge, birding, offering unsolicited advice to the team coaches throughout many years of Red Sox and Patriots broadcasts, and accompanying his wife to the opera. Bill was the family’s outdoor chef throughout countless Duxbury summers, specializing in the grilling of steaks rare enough to be proclaimed “still kicking”!

Friends are invited to attend a memorial service to be held on Thursday, December 15 at 11:00 AM, St. John’s Episcopal Church, Duxbury, with a reception to follow in the Parish Hall. Mr. Hearn's funeral service can also be viewed online, please visit www.stjohnsduxbury.org and click on "view live service". Interment will be at St. John’s cemetery. In lieu of flowers, contributions in Bill’s memory may be made to The Partridge Academy in Duxbury, P.O. Box 2552, Duxbury, MA 02331.