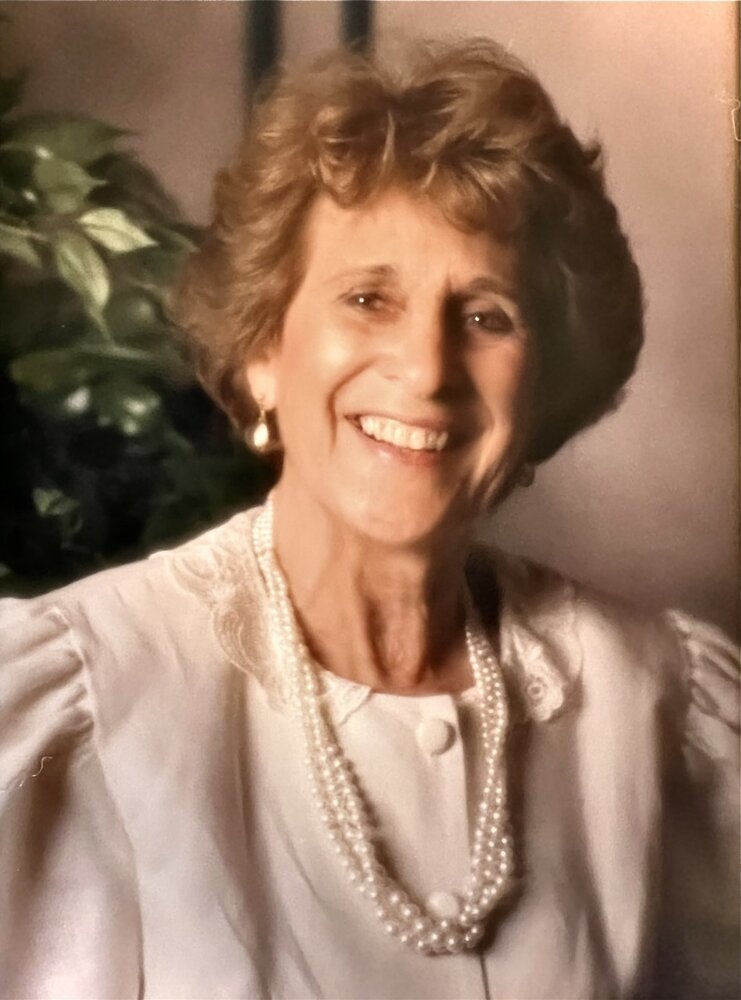 Please share a memory of Dorothea to include in a keepsake book for family and friends.
View Tribute Book

Dorothea (“Dot”) Mary Murphy, the proud mother of nine children, died peacefully, at age 101, in Alexandria, Virginia on November 19, 2022.  Dot was born in Boston, MA on September 16, 1921, the second of seven children of Irish immigrant parents, Patrick and Mary Quinn. She was raised in the shadow of Harvard Stadium, attended St. Mary’s Catholic High School, graduating at age 16, during the height of the Great Depression.

Growing up, Dot was always in search of a ball game, foot race or softball game, crestfallen when she was told that “as a girl, she had aged-out” of sports.  Dot’s father taught her how to repair all things mechanical, including washing machines, clothes dryers, stoves and sewing machines, a skill she utilized throughout her life. At times, Dot served as the family plumber, repairman, painter, and wallpaper installer.  She became “famous” as a 16-year-old when the Boston newspapers recounted her heroism after rescuing her sister, Pat, from a house fire.

Dot moved with her family to West Roxbury in the late 1930s and was employed in a number of retail and secretarial positions in Boston.  She developed a keen interest in local politics, volunteering for several of James Curley’s many political campaigns and later volunteering for Congressman James Burke. As with many of Irish heritage, Dot was an unflinching devotee of the Kennedy political dynasty. Dot could not abide racism, embracing Dr. King’s enduring message to judge by the content of our character -- not the color our skin.  In the early 1960’s, Dot joined non-violent civil rights marches in Boston to promote desegregation.

One of the Greatest Generation eager to contribute the WWII effort, Dot enlisted in the U.S. Navy’s “Women Accepted for Volunteer Emergency Service (WAVES).”  The war ended just 29 days after Dot was sworn into service because: “our enemies surrendered rather than face me as an adversary.”

Dot was swept off of her feet by a returning U.S. Coast Guard veteran, Frederick R. Murphy.  After a whirlwind romance, Fred and Dot married. They moved into a duplex in Hyde Park, MA where the first two of their nine children were born.  Needing space for their growing family, Dot and Fred relocated to a post-war development in Quincy MA. It was a close-knit Irish neighborhood, with working dads and stay at home moms, one automobile per family and scores of kids playing hide and seek, kick ball, and red rover. It was a simpler time, where all of the neighborhood children went home for dinner or for bed in the summertime when Dot rang her famous “Murphy cow bell”.

Dot and Fred centered their family life in their deeply-rooted Catholic faith, American values and Irish culture.  Theirs was a home that embraced the role of the Church in family life, the promise and abiding virtue of America, the value of hard work, respect for others, and personal responsibility --- tempered bythe, at times, contradictory Irish traits of fatalism, optimism, self-deprecation, pride, wit, humor, sentimentality, loyalty, pugnacity, kindness, stubbornness, rebellion and resignation.

Holidays were truly celebrated and the heavenly holiday eve aroma of Dot’s apple pies filled the air with anticipation and long- awaited gatherings with all of the cousins.  The door was always open for a friend or roommate who could not make it home for the holidays. Just as she had done growing up, Dot expected that all of the children contribute to the family, finding whatever good paying, age suitable, work was available --- delivering newspapers, shoveling snow, mowing lawns, waiting tables or baby-sitting. Home life was happy but hugs and compliments were sparingly administered and saved for only special occasions.  One thing was clear, the Murphy home was not a democracy.  There was but one law, and it was all five foot three inches of Dot.  With so many underfoot (Dot was pregnant or had a child under one year old for 19 consecutive years) a benevolent dictatorship allowed Dot to bring order to “organized confusion.”

That family model was rocked to its core just months after the family relocated to Duxbury MA in 1970 with Fred’s sudden death from cardiac arrest in August, followed not long thereafter by the tragic loss of Dot’s oldest son, Frederick M. Murphy, who died in service to our country. Against overwhelming financial and emotional odds, and with many of the kids still in grade school, Dot refused to give up.  Drawing on both the support of her extended family and old and new family friends, and Dot’s sheer force of will, the family survived. Remarkably, all of Dot’s children eventually graduated from high school and earned college degrees.

As the children left the nest, Dot took positions with the Town of Duxbury, the First National Bank of Boston, and the Massachusetts and D.C. Offices of Congressman Gerry Studds.  Dot began to show more of her softer side.  When grandchildren were born, Dot became the “Baby Whisperer,” calming down even the most distressed newborn or frightened new mother.  She had seen it all and was a fountain of practical wisdom on any number of subjects, all of which she freely shared, in the form of advice, “Do yourself a favor and ….”

As many of her children had careers in the DC area, Dot eventually moved to Northern Virginia in the 1980s, but never lost her unyielding affection for her home state. She remained a life-long Bay Stater, a rabid fan of the Red Sox, Patriots, and the Cape. No arguing about it and no matter where she was:“Everything was better up North.”

Even as she aged, Dot stayed mentally and physically young by remaining active, walking two to three miles a day until she was 99 years old, doing all things in moderation, and constantly spending time with young people.  She remained deeply interested and involved in both the world around her as well as in the lives of her children, their spouses, their friends, new in-laws, her grandchildren and their friends and spouses, her great grandchildren, and nieces and nephews and their families.  While attending to her ever-extending family could have been a full-time job, Dot found time to voraciously read both fiction and non-fiction books and to tap into her artistic side, producing beautiful embroidery artwork.

Dot’s many friendships provided her with opportunities to travel to mainland Europe, Ireland, the Hawaiian Islands, Alaska, and across the United States.  She never missed an annual pilgrimage to Cape Cod.  Even with the crushing losses of two more of her children, Elaine and Joe, Dot’s indomitable spirit remained undaunted.  Dot’s life was not without considerable blessings. She enjoyed the love and support of family, friends and neighbors. She enjoyed great health, living a disease-free existence for a hundred years which allowed her to live independently until the last six months of her life.  Even after she grudgingly agreed to move into assisted living six months ago, she found a new group of friends and admirers.  Dot’s network of friends, admirers and well-wishers grew throughout her life.  People young and old gravitated to her as she aged, probably because Dot was a fascinating woman and, perhaps, because she took more interest in others’ lives than she did herown.

Dot’s legacy includes more than her progeny and the warm memories of her unique life; it includes the lessons that continue to resonate.  About avarice, she quoted scripture: “What doth the profit of man should he gain the riches of the earth but suffer the loss of his soul?” On disparaging others, Dot asked “would you like to be judged by your own worst act?” On moderation and self-discipline, she advised: “Just have one.” And, concerning leading a worthwhile and purpose-filled life: “Leave the world a better place than the one you found.”   No doubt, our world is better because Dot has been a part of our lives.

A Mass of Christian Burial will be held on November 30, 2022,at 10:00 AM at Holy Family Catholic Church on Tremont Street in Duxbury MA, followed by a burial service at the family plot in Mayflower Cemetery in Duxbury MA.

In lieu of flowers, the family asks that you honor Dot’s memory with a contribution to the Plymouth Community Food Pantry, plymouthfoodpantry.org, or your local foodbank or to Folds of Honor, www.foldsofhonor.org, a veteran’s organization giving scholarships to the spouses and children of America’s fallen or disabled military and first responders.

Share Your Memory of
Dorothea
Upload Your Memory View All Memories
Be the first to upload a memory!
Share A Memory
Send Flowers
Plant a Tree