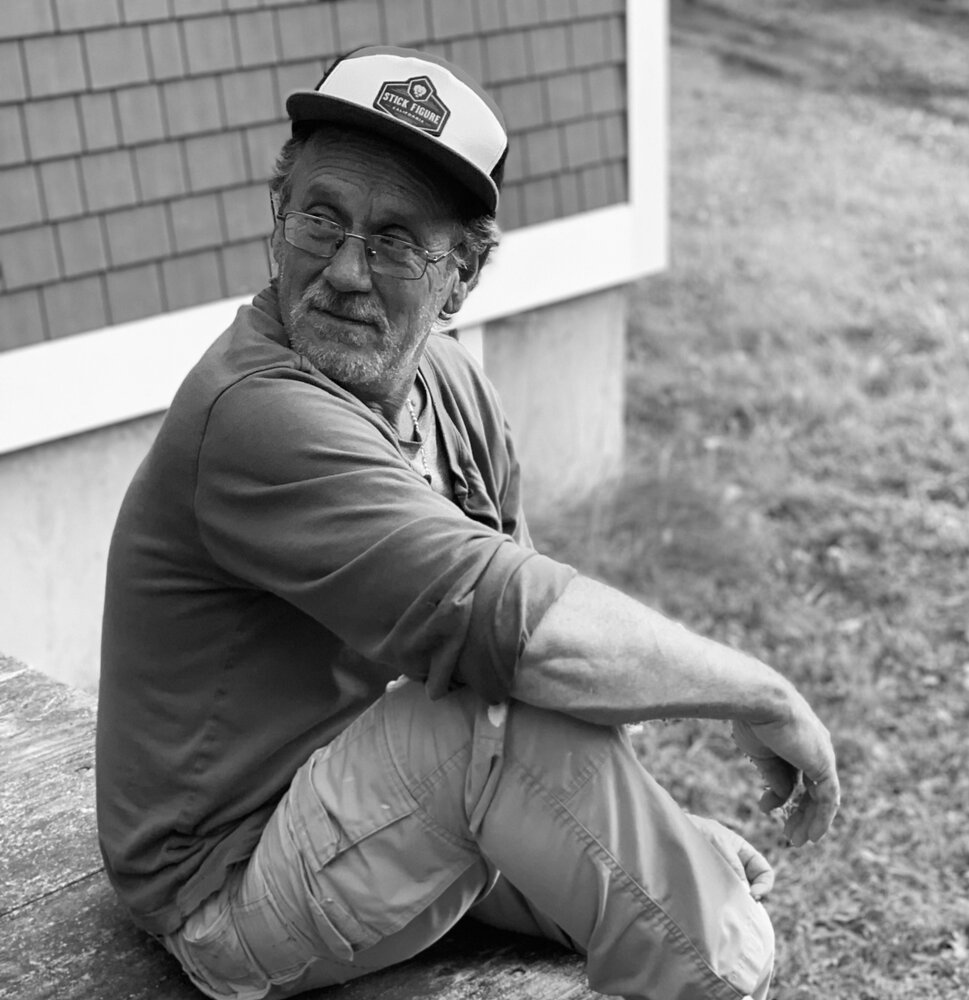 Please share a memory of Hugh to include in a keepsake book for family and friends.
View Tribute Book

Hugh John Dahlen, 61, passed away on November 14th, in Plymouth, Massachusetts, surrounded by family and loved ones. Born June 29th, 1961 to John and the late Sheila (Noonan) Dahlen, he was raised in Duxbury with seven beloved siblings: Shawn, Colleen, Colin, Maura, Neal, Brent, and Deirdre. He graduated high school in 1979 and went on to study at UMass Amherst before returning home to pursue his passion for carpentry.

Hugh enjoyed a gratifying career, building and remodeling homes as an independent contractor, often with his late brother, Brent, or subcontracting for his late brother, Shawn. In the woodshop, he loved crafting furniture and refurbishing, or “repurposing” any piece of scrap he could get his hands on. Much of Hugh’s favorite work encompassed time well-spent alongside and in service of his family, or the many friends he regarded as such. He would bicker over blueprints and maintain stubborn stand-offs while perched atop scaffolding, but he truly, whole-heartedly relished any opportunity to share a project with a loved one.

If you asked Hugh for a hand, he’d give you two. If you asked him for two, he’d strap on a toolbelt and load up the truck. He leaves behind a legacy of woodwork that will stand for centuries in his honor. He shared lessons, not only in craftsmanship, but in navigating life with grace, humility, integrity, and an open heart that will be carried on for generations by a crew lucky enough to have been his apprentices.

Hugh was a dear friend to his former wife, Linda (Tirrell) Garrison, and an extraordinary father to their son, Conor, and daughter, Kelsie. He also embraced and cherished several “pseudo-” sons and daughters, as he called them; he cared for Michael Davis, Julia Garrison, and his nephews Brian, Timothy, Scott and Michael Dahlen as if they were his own. Hugh’s heart knew no boundaries, only growing larger with each new addition to the extended Dahlen Family.

He celebrated the birth of his granddaughter, Jada, born to Conor and the late Jerrica Dos Santos in 2016. “BooBoo,” as he called her, lit up Hugh’s world and being her “PaPa” was the greatest joy of his life. In 2018, Hugh purchased a home in Kingston where he enjoyed endless renovation projects, relaxing nights by the woodstove, walks by the Jones River, and teaching Jada to care for a menagerie of animals (with names such as, DonutTina). It’s hard to say whether his home was more filled with tools of the trade or with BooBoo’s books and toys.

Hugh looked forward to visiting and maintaining the Dahlen Family home in Deer Isle, Maine where many of his fondest memories were made: building, boating, fishing, hunting, gardening, birdwatching, wild blueberry pancakes, campfire stories, and splashing with Jada in the tidepools.

Hugh is survived by: his son, Conor Dahlen and granddaughter, Jada Dahlen of Sandwich; his daughter, Kelsie Dahlen of Edgartown; his former wife, Linda (Tirrell) Garrison of Sandwich; his father, John M. Dahlen of Marshfield; his sisters, Colleen of Plympton and Deirdre of Kingston; his sister, Maura Garvey and her husband Paul of Duxbury; his brother, Neal and his wife Lorrie of Marshfield; his brother, Colin and his wife Loryn of Kingston; his sister-in-law, Cindy Dahlen of Kingston; his former sisters-in-law, Susan Kane and Leora Cabral of Kingston. Hugh is survived by countless nieces, nephews, great-nieces, and great-nephews whom he loved dearly. He is predeceased by his mother, Sheila (Noonan) Dahlen, his brothers, Shawn and Brent Dahlen, and his niece, Katrina Garvey of Duxbury.

Memorial and burial services will be privately held at Mayflower Cemetery in Duxbury. In lieu of flowers, donations may be made in Hugh’s honor to the Opiate-Free Island Partnership, a 501(c) nonprofit organization providing much-needed help and support to the Deer Isle community.

Share Your Memory of
Hugh
Upload Your Memory View All Memories
Be the first to upload a memory!
Share A Memory
Send Flowers
Plant a Tree