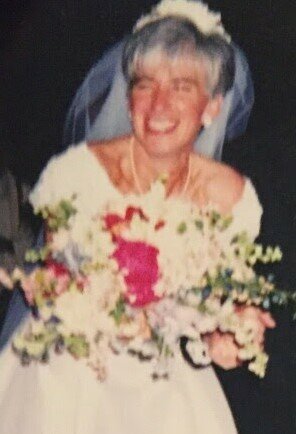 Please share a memory of Patricia to include in a keepsake book for family and friends.
View Tribute Book

Patricia Ann Hickey Parrino, a practicing Registered Nurse with a distinguished working career, passed away peacefully in Duxbury, Massachusetts early on the morning of September 1, 2022. She had struggled with a rare form of Alzheimer's Disease for more than eleven years.

Patricia was born on May 6, 1948. She spent her childhood in Quincy, Massachusetts with her parents James and Alice Hickey, and her older siblings, James II (Jimmy) and Alice (Ali). Patricia's father spent most of his career with General Electric, commuting daily from Quincy to Lynn. Her mom became the first woman Nurse Anesthetist at the Carney Hospital in Dorchester.

As the youngest of three, Patricia was eager for attention and became known as "Bee”,

a name she assigned herself as soon as she could talk. As a child, she decided to emulate her mother and to become a nurse. She went on to attain a nursing degree at the Boston City Hospital School of Nursing, and a BA at Boston State College, which was later integrated into UMass Boston.

Later, Patricia's enduring nickname became Shishy, conferred upon by her niece Jane, while Jane was a toddler.

Patricia spent most of her nursing career on the wards of Boston City Hospital as a staff nurse in the Surgical Building (BU Service) and as a supervising nurse in the Medical Building after BU became the principal teaching service there. During this period, she lived with Betsy Keating and Patricia Kimball, both RN’s, in the Quincy-Milton area. An early adopter, Patricia was the first person on her block to drive an original Subaru, and then a big red Jeep Cherokee that she adored.

Both of these vehicles were perfect for ski trips in New England and Canada and for ferrying herself and nursing cohorts back and forth from BU Medical Center during emergencies. Patricia was best known for her ferrying efforts during the Great Blizzard of 1978, but she was also known as an avid skier and golfer and for her singular exploits as a skydiver.

Wherever she went, Patricia was loved and appreciated by her friends, colleagues, and patients. As Nurse Manager of the Primary Care practice at University Hospital, she delighted everyone around her as she worked gently with people to make things happen. One Friday afternoon after Thanksgiving, when all the clinics were shut down except ours, Patricia brought in a television so that we could check on the scoring in the BC game that culminated in Doug Flutie’s long and victorious pass to Gerard Phelan. Her efforts resulted in a high level of staff satisfaction, with no evident reduction in quality of care, patient satisfaction, office wait times, or physician productivity.

Patricia married Tom in 1998, a year after he had passed an interview with Mrs.  Hickey. They honeymooned in Bermuda, a trip that was orchestrated for them by Ali. In 2008, they returned to Bermuda for their tenth anniversary, and for one last time in 2012, as her condition was advancing.

Between 1999 and 2012, Patricia and Tom took care of veterans in West Palm Beach. Patricia then lived with Tom in Hanover, NH during Tom’s assignment at White River Junction, Vermont. In 2012, the VA brought them back to the Boston area, and Patricia benefited from the caring attention she received from members of the Neurology Department at Brigham and Women's Hospital.

Patricia is survived by her husband Tom, her mother Alice, her brother Jim, her sister-in-law Judy, her sister Ali, her nieces and nephews James III, Jane, and their spouses Lindsey Hickey and Bill Boozang, her grand-nieces and nephews, and Patricia's nephew Ned, a Premier League enthusiast who occasionally travels to England for big games, and returns with extraordinary accounts to be shared with family at Thanksgiving and Christmas.

In lieu of flowers, please consider making a gift to the Department of Neurology, Brigham and Women's Hospital by contacting Ginny Fuller Marinaro in the BWH Development Office, 617-510-9869.

Share Your Memory of
Patricia
Upload Your Memory View All Memories
Be the first to upload a memory!
Share A Memory
Send Flowers
Plant a Tree