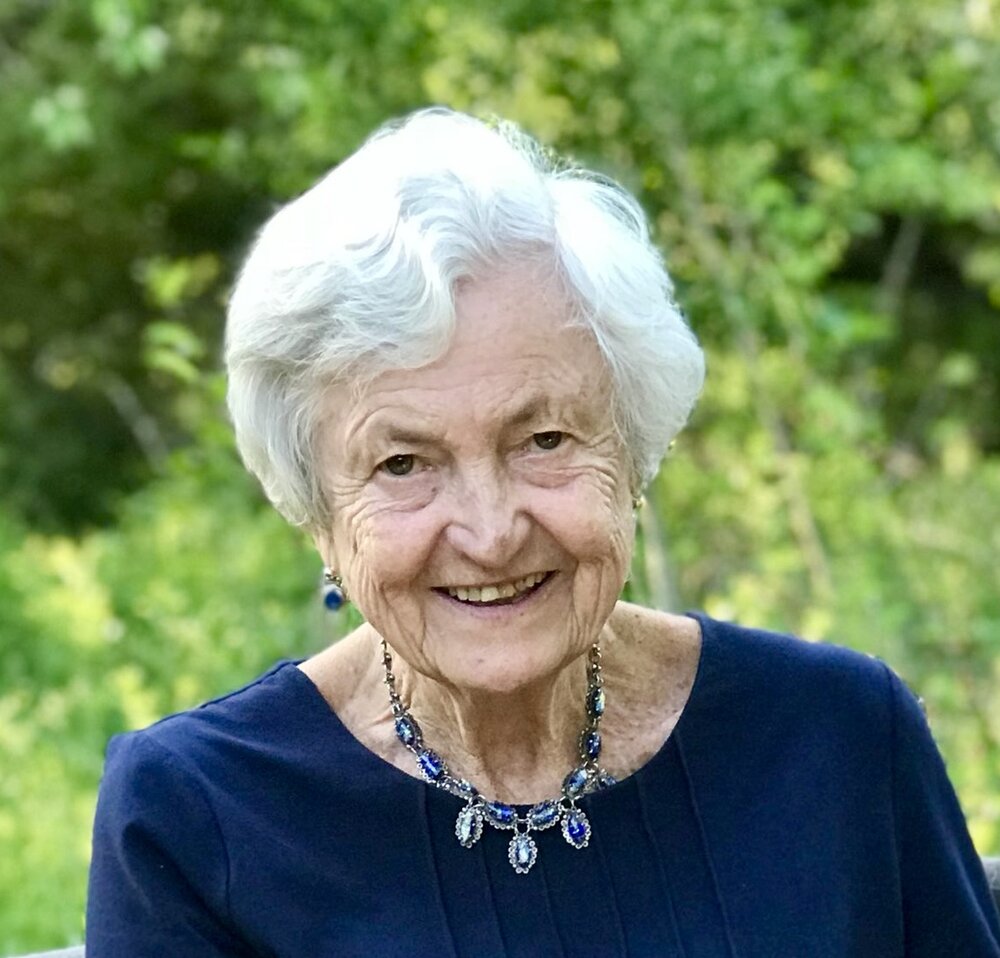 Obituary of Alice A Vautrain

Please share a memory of Alice to include in a keepsake book for family and friends.
View Tribute Book

Alice Agnes Vautrain, née Walsh, beloved wife of the late Arthur Philip Vautrain and mother of five daughters, died peacefully on August 8, 2022 in Duxbury, Massachusetts.  Alice was born on February 16, 1933,  in St. Paul, Minnesota, daughter of the late Richard Edmund and Mary Florence Walsh née Marriott.  Spontaneous and fun, Alice radiated joy and warmth, enchanting a generation of pupils as storyteller and Children’s Librarian for the Duxbury Public Schools.  Alice derived happiness in celebrating others, projecting a generous heart; as Librarian, she adored the students and always was interested in what they had to say.  As with any talented gardener from Minnesota, Alice was an optimist.

Granddaughter of a pony express rider in the frontier, Alice inherited his thirst for adventure and independence.

In the 1930’s, her free-spirited mother nurtured these traits, settling her five children into the back seat of her convertible for audacious treks from St. Paul to her native Silver City, New Mexico, with her oldest son navigating from the front seat and coils of dust billowing into the sky behind them; the lack of highways and road signs contributed to the excitement.

Alice graduated from the Convent of the Visitation High School in St. Paul, where she displayed talents as a thespian—starring as Michael the Archangel—and cellist.  Over summer breaks while attending the College of St. Catherine, Alice traveled by train to Montana, where she waitressed at the Many Glacier Hotel in Glacier Park.  Snapshots from this period show her in waitress uniform and starched cap, paddling canoes around the lake and scaling the fieldstone walls of the dining room, presumably when business was slow.  After earning a degree in Library Science, Alice toured Europe, visiting cousins in Kilkenny before roaming the continent pursuing budding interests in the fine arts.

Once home Alice pursued Masters Degree studies in Library Science at the University of Minnesota.  She accepted her first position as Law Librarian at Loyola University in Chicago.  Her daring bid to strike out for California to join Long Beach Public Library as Children’s Librarian changed her life; Alice discovered her calling and forged lifelong friendships with her colleagues.  Alice planned for the major branch library at Los Altos, where she was appointed Head Children’s Librarian.  In Long Beach, she was introduced to a rakish Bostonian, Arthur (Art) Vautrain, Lieutenant (j.g.) in the US Navy, who made her laugh and captured her heart in a romance that thrived for sixty years.  Their love blossomed over pursuit of shared devotion to classical music, literature, history, gardening, camping, and interest in fine cuisine; passions for reading and learning infused their life together with thoughtfulness.  On their first date, Art prepared steak with Bearnaise sauce.  Alice’s style of attire of this period was characterized by the elegant restraint that communicated mystique, her regal hat and kid gloves belying a playful wit.

In 1957, Alice and Art married at the Cathedral of St. Paul, St. Paul, Minnesota.  Alice served as School Librarian for the Driscoll School in Brookline, Mass. while Art attended Harvard Business School.  In 1960, the couple and two toddlers settled into an old colonial situated one block from the Public Library in Stonington Borough, Conn.  Art commuted to Electric Boat in nearby Groton.  Three more daughters were born.  Alice volunteered for the book selection committee of the library and often read stories to children.  She volunteered for the March of Dimes and Stonington Parent-Teachers Association (PTA.)

Alice developed mastery of fine cooking.  In the early 1960’s she startled onlookers by plucking mussels off rocks for her saffron-infused bouillabaisse, when eating mussels simply was not done.  Christmas feasts were built around ambrosial plum pudding (flambé), her English great-grandmother’s recipe.  Alice taught her children to try to be useful, to clam and weed, pick wild blueberries for pies and wild Concord grapes for amethyst-colored jelly.  Art tailored his cultivation of vegetables to tomatoes, snap peas, shallots, asparagus and the heirloom tomatoes she preferred to prepare, and built shelves to put tomatoes by.  Alice planted dahlias and daffodils all over.  The annual first frost found Alice standing beside her sous-chef husband, jarring piccalilli from bushels of green tomatoes, an enduring portrait of tenderness between the two.

In 1966, Art was transferred to General Dynamics, and Alice, Art and their five daughters relocated to Duxbury, Mass.  Their Island Creek home and yard became a rollicking playground for legions of neighborhood children.  Alice’s friends from Mothers’ Morning Out became as close as sisters, to this day.  Alongside these other young mothers, Alice treated her daughters to idyllic summers on Duxbury Beach.  She presided over their fun from a nearby beach chair serenely engrossed in a book.  She too loved a snow day.  She taught her daughters to skate on the bogs and how to steer a sled, never minding the wild capers.

Alice preferred fiction, inspired by writers from all over the world, new young and established authors alike.  She once suggested that her greatest fear was to finish all her books and not have anything to read while overseas, a dread once realized in Athens.  Asked about sparse bookshelves in her home, Alice explained that she always gave away books she loved to others whom she thought might enjoy them.  She loved her bookclub friends; family gatherings were preceded by epic book swaps.  Once her children left home, Alice mused that she was able to read uninterrupted for the first time in two decades.

As Alice’s cooking became locally celebrated, she taught adult courses in French cuisine, introducing her family to sample menus to solicit critiques; one daughter astounded a Duxbury Clipper journalist by declaring Tripe à la Mode de Caen a favorite dish.  In 1972, after her children entered school, Alice accepted a position as Children’s Librarian at the Duxbury Free Library.  A year later, she assumed a career position as Children’s Librarian at the Duxbury Public Schools, over twenty years encouraging a generation of pupils to become lifelong readers and forging close bonds with volunteers and colleagues.  Alice always knew just the right book to appeal to a child, and how to bring storytelling—and her library—alive.  She embraced the enthusiasm and laughter of circles of first-graders captivated by her readings of Where the Wild Things Are and Little Bear.

Alice’s library was playful, where children went to engage interests, boisterous with chaotic enthusiasm, flopping on the floor, mesmerized by that perfect book or National Geographic.  She enlisted the children’s help in choosing books for the library collection, stimulating early critical thinking that counted.

On family cross-country camping trips, Alice taught her daughters how to clean fish and sauté Trout Meunière over a campfire.  She taught them all verses to the Wild Colonial Boy.  As the Blizzard of ’78 raged, Alice built a fire in the wood stove and prepared crêpes stuffed with crabmeat to appease the hunger of her snowbound urchins.

Once their children became adolescents, Alice and Art began traveling throughout the world, admiring constellations over the Great Karoo, the soaring galleries of Musée d’Orsay and sublime cuisine of Tuscany.  As Art visited the Princip Bridge, Alice sought out the ancient Vijecnica library of Sarajevo; she went on to visit countless Children’s Rooms around the globe, including one in Reykjavik three years ago.  Alice identified her favorite pastime as strolling with her husband on Duxbury Beach.  Alice and Art loved sailing Duxbury Bay waters in their catboat Breezing Up and circumnavigated Clark’s Island several times. For forty years, the couple attended Boston Symphony series; they loved the Museum of Fine Arts, opera and galleries and homes of authors and poets the world over.  Alice and Art celebrated their sixtieth anniversary with family over Mozart at Tanglewood.

Asked about aspirations for her five daughters, Alice always said her dream was for each to become independent.  Her legacy was to inspire young people to explore all of the possibilities, unfettered by convention or limited expectations; she steered a girl interested in public service to biographies of female pioneers in science, aviation, government, journalism and wartime who surmounted obstacles to achieve monumental goals.  By highlighting the travails of heroes who had come before, she instilled perseverance and confidence in our capabilities.  She gave the gift of independence.

In addition to the University of Minnesota, Alice pursued post-graduate studies at Bridgewater State College and Simmons College.

Alice served on the Duxbury Cultural Council and for18 years was a Trustee for the Duxbury Rural & Historical Society.  She volunteered to help handicapped children, served as President of Duxbury Friends of Cerebral Palsy (1969-1970), and read to the blind.

In her final days, Alice wanted her daughters, grandchildren and all of her beloved friends to know how much she loved them and how they had enriched her life and brought her immeasurable happiness.

Share Your Memory of
Alice
Upload Your Memory View All Memories
Be the first to upload a memory!
Share A Memory
Send Flowers
Plant a Tree