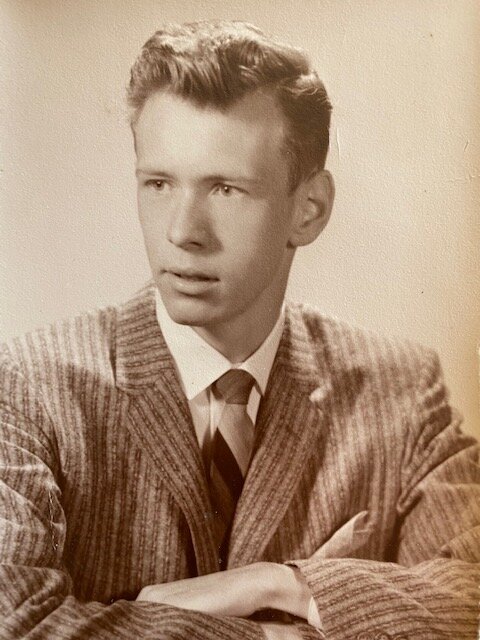 Please share a memory of Henry to include in a keepsake book for family and friends.
View Tribute Book

Henry C. Perkins III, aged 80, passed away on May 4th at Beth Israel Deaconess Hospital, Plymouth. After a brave and determined battle with Esophageal Cancer, under the home care of his devoted children. Henry, Hank, was born in Lawrence Massachusetts on June 25th, 1941. The son of Henry C. Perkins II and Anne T. Perkins (Hynes), and the brother of James Perkins, predeceased. He grew up in a three-story tenement house along with his grandparents Peter Hynes and Margaret Hynes, his aunt and uncle Marguerite Richard (Hynes) and Harold Richard, and his cousins Mary Anne Gilbert (Richard) and John Richard. He had many wonderful and funny stories of what it was like to grow up in a close-knit, multi-generational Irish home in the 1940’s and 50’s. After every family funeral in Lawrence he would drive us by his childhood home. He graduated from Central Catholic High School, Lawrence MA, in 1959. He went on to receive his Bachelor’s Degree in Forestry from The University of Massachusetts, Amherst. The first in his family to attend college.

He met his wife Mary Anne Greene, also of Lawrence, after spying her at a Hometown Football Game. The rest is history. They had a long, rich, and loving marriage. They had six children. Kathleen Perkins of Wareham MA, Beth Raymond of Plymouth MA, Christina Adkins of Wareham MA, and Sean Perkins of Carver MA. Predeceased are his premature twin daughters, Mary Catherine and Anne Patricia. In 1972 he and Mary Anne moved the family from the north shore to the then small, rural town of Carver, after starting a job in his field at the North Carver Saw Mill. He later went on be a consultant for a gas company, working the streets of Boston. His humorous stories about his adventures walking the neighborhoods brought joy to him and his family.

Hank had a lifelong passion for the study of Native American History and Culture. Started at a young age, beginning with incredible drawings of men on horseback in full regalia riding the Plains, and culminating in a vast library on Native American topics. He was delivered more books the week before he passed! It bought him great pleasure cataloguing, studying, and writing about this subject. He founded the company Black Eagle Ceremonial Supplies, selling Native American products from his home in Carver to people all over the country. Later he founded Black Eagle Bison Company, along with his business partner Mary Anne. They raised Buffalo remotely on a farm in Maine and sold the meats on Sundays at the Carver Farmer’s Market for years. He built and maintained several sweat lodges, hosting ceremonies for family and friends. What he loved most was sharing this experience with his grandchildren, as well as taking them to Pow Wows throughout New England. Hank and Mary Anne were Sundancers. For 24 years he traveled to Mexico to partake in this sacred ceremony, on a mountain above the Pyramids of the Sun and Moon. His children and grandchildren accompanied him throughout the years to support him. He leaves behind his cherished grandchildren Erin Doonan, Patrick Doonan, Taylor McFadyen, Ryan Berriault, Kaitlyn Berriault, Josh Raymond, Kelsey Berriault, Sarah Raymond, Timothy Berriault, Tara Berriault, and great-granddaughter MacKenzie Eastman. And also his son-in-law Thomas Adkins. He built the most wonderful family summer house in Wentworth, New Hampshire with his father and brother Jim. It has been a home of love, joy, and celebration for over 50 years. Your seat at the head of the table is now empty Dad, but we will always see you sitting there managing the play list for our epic parties. He also enjoyed trips to Ireland with Maryanne, to visit and stay with their relatives.

Mary Anne was diagnosed with Alzheimer’s shortly before they ended their careers. Hank took care of her tirelessly, devotedly, until the very end; determined to keep her home so she could pass at his side surrounded by her children and sons-in-law. His example of love, compassion, and commitment taught us the most invaluable life lesson. He is now reunited with Mary Anne, enjoying their eternal retirement they so deserved but never got to experience together on Earth. Undoubtedly there is some Rolling Stones and Van Morrison involved, and of course, dancing The Stack of Barley! We love, miss and honor you Dad. You encountered and faced cancer like a Sundancer, until your very last breath. And in memory of every Saint Patrick’s Day Party you hosted yearly, Slainte!

Visiting hours will be held Monday, May 9th from 3-7:00 pm at Shepherd Funeral Home, 116 Main Street, Carver MA. A funeral mass will be held on Tuesday May 10th at 10:00 am, Our Lady of Lourdes, Carver MA. In lieu of flowers you may donate to Help Preserve the American Bison @nationalbuffalofoundation.org

Share Your Memory of
Henry
Upload Your Memory View All Memories
Be the first to upload a memory!
Share A Memory
Send Flowers
Plant a Tree