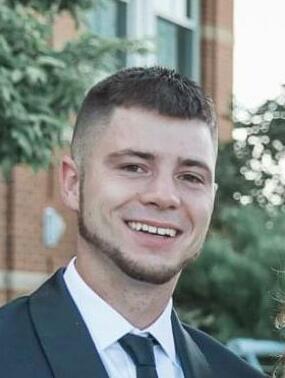 “Life is not about how many breaths you take but how many moments that take your breath away.” -

Jeremy John Badot, Age 26, of Kingston, Massachusetts passed away on Sunday, March 13th 2022. Jeremy was the beloved son of John and Heidi Badot, Fiance of Ashley Adamcewicz, and brother of Jonathan and Gianna Badot. In addition to his family he is survived by his grandparents, Bruce and Alice Sunnerberg, Fran and Suzanne Smith, his future in-laws Joe and Bridget, his dog Banks, aunts, uncles, cousins, and many wonderful friends.

Jeremy was born in Plymouth, MA, on December 21st 1995. Jeremy grew up with his family on the “Badot Rosa” in Halifax, MA where he often left random “lawn ornaments” for his father. He graduated from Silver Lake High School in 2015. He then went on to continue his education at New England Institute of Technology in Rhode Island where he earned his associate degree in Electrical in May 2018.

After graduation Jeremy joined the Wayne J. Griffin Electric team. He loved his job and was admired by many for his work ethic. He went on to complete his apprenticeship and recently earned his Journeyman license.

Jeremy was passionate about many things, including boating, fishing, snowmobiling, hiking, traveling, hunting, riding dirt bikes, quads, and being surrounded by his family and friends. His ability to repair anything earned him the nickname “Jerry Rig” by his friends.

Jeremy loved spending his summers on his family boat the “Heidi Ho” where he enjoyed “tuna wishing” with his father John and brother Jonathan and also hanging at the “deep hole” and “the spit”. Enjoying fun in the sun!

He spent the winter months at his grandparents house in Grafton, NH, where at a very young age he began to carry on the third generation of snowmobilers in his family.

Jeremy’s father’s passion for riding anything with a motor was passed to Jeremy as a young child and he developed his own passion for “burning gas”. Whether riding next to his family, best friends, or fiance he loved to ride all day all night and enjoyed every single minute to the fullest.

In 2019, Jeremy and Ashley purchased their home in Kingston and it quickly became the worksite where family and friends chipped in to help the renovation project.

Then in 2020 he drove across the country with Ashley, Jonathan, and Gianna to bring home a new addition to the family, Banks! Banks quickly became his loyal and faithful companion. He enjoyed duck hunting with Banks, his uncle, and best friend in the Jones River.

Jeremy recently went on a trip to the Grand Canyon in Arizona where he asked the love of his life of 10 years, Ashley Ann, to become his wife.

Jeremy had a special ability to help anyone do anything…from carpentry to electrical to cutting firewood, working on vehicles, and endless projects. He could also find anything for anyone whether it was a car, truck, boat, quad, motor, or tools…you name it, Jeremy could find it for you!

He was a one of a kind genuine hearted spirit that always made people feel loved and truly lived life to the fullest every single day.

Jeremy will forever be remembered, loved, and so deeply missed leaving a void that will never be filled. Ride on.

Share Your Memory of
Jeremy
Upload Your Memory View All Memories
Be the first to upload a memory!
Share A Memory
Send Flowers
Plant a Tree