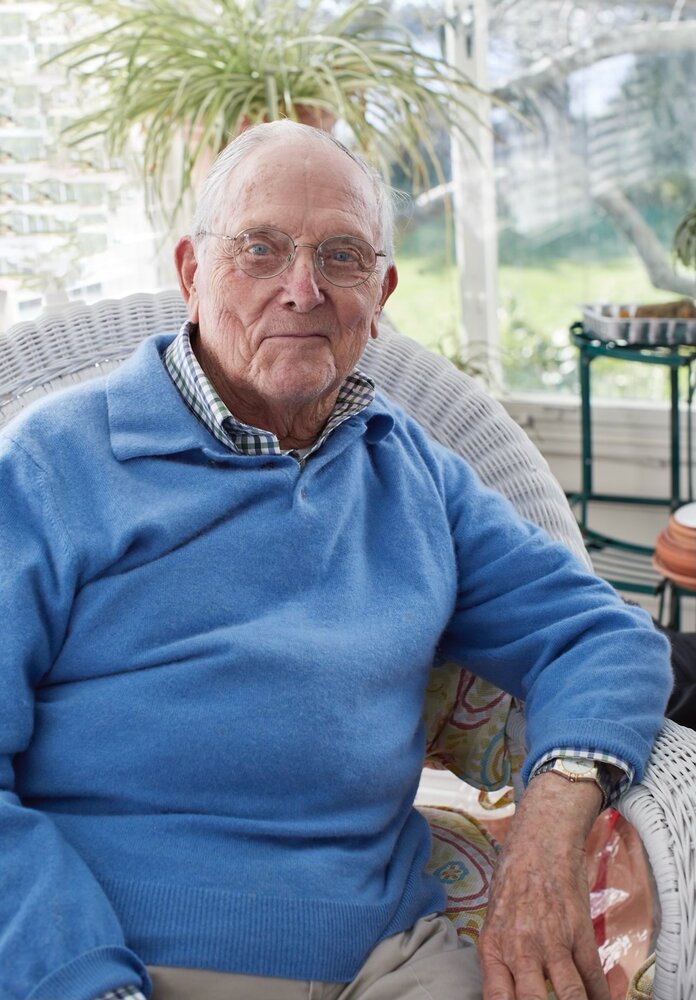 DUXBURY, Mass. -- Dr. William Hardy Hendren III, a giant in American surgery, passed away peacefully at home on March 1, 2022 in Duxbury, Massachusetts, surrounded by the love and comfort of his family. He was 96. The leading pediatric surgeon of his generation, Hendren was renowned worldwide for his pioneering ability to correct seemingly intractable anatomical conditions.

Dr. Hendren was born February 7, 1926, in New Orleans. The only son of a film-industry executive and his wife, Hendren and his two sisters moved with their family in 1933 to Kansas City, Missouri, where he spent much of his childhood. Hendren excelled in his studies, sang in the church choir, and became an Eagle Scout, an experience he would later credit for much of his success. He discovered what would be his lifelong passion—surgery—while dissecting a tadpole — and watching the death of a boyhood friend from a congenital defect that defied cure at the time.

Following family tradition, he graduated from The Woodberry Forest School in Virginia in 1943. Woodberry played an important role in his life, as it was there that he met the love of his life, Eleanor McKenna, at a football game. Hendren enrolled briefly at Dartmouth College. America was at war, and Hendren took leave from Dartmouth that June at age 17 to enlist as an aviation cadet. He was called to active duty in October. He earned his wings as a naval aviator and was carrier-qualified, though peace would come before he could be sent into combat. Hendren was extremely proud of his service. His Naval certificate was the only diploma that was ever displayed in his office. Hendren returned to Dartmouth after three years of active Navy duty, but not before marrying Eleanor in 1947. Hendren earned his bachelor’s degree from Dartmouth in 1948, and, in 1950, completed Dartmouth’s two-year medical program. He then transferred to Harvard Medical School, from which he graduated cum laude in 1952. As a senior at Harvard, it was his inspiration and leadership that created the National Internship Matching plan, pairing graduating medical students to post-doctoral training programs. The Matching Plan has been in use throughout the United States since 1952.

After serving as an intern and assistant resident at Massachusetts General Hospital (MGH), Hendren from 1955 to 1956 was a senior surgical resident at Children’s Hospital, Boston (now Boston Children’s Hospital) where he trained under the pioneering pediatric surgeon, Robert E. Gross.  Hendren served in 1958 as Chief Surgical Resident at MGH under Dr. Edward D. Churchill, and then as Chief Surgical Resident at Boston Children’s during the 1959–1960 year. After completing his eight years of surgical training, Hendren returned to MGH at Dr. Churchill’s request, founding the Department of Pediatric Surgery. He served as Chief from 1960 to 1982. While serving in that capacity, Hendren began to specialize in the repair of pediatric conditions that had previously been thought to be beyond hope. In 1969, he became the first surgeon in Boston to successfully separate conjoined—or Siamese—twins.

A uniquely gifted surgeon, Hendren was renowned for his technical prowess. He felt comfortable operating in virtually any area. During his years at MGH, Hendren developed many pioneering contributions in the fields of general pediatric surgery and pediatric urology. Hendren is perhaps best known for his groundbreaking success in the surgical correction of complex genitourinary defects, such as cloaca, a defect involving multiple abdominal organs and systems that generations of surgeons before him had pronounced impossible to fix. He also demonstrated that patients—both children and adults—who had been treated by diversion of their urinary tracts to empty into a bag, could be reconstructed in most cases and function normally post-surgery. He termed this “undiversion.” The American College of Surgeons stated, “This pioneering and innovative development revolutionized the practice of pediatric surgery.” Megaureter repair was another of Hendren’s contributions that became a staple of reconstructive urology. Many of these complex operations lasted 18 hours or more, earning Hendren the nickname “Hardly Human”—a term used endearingly by friends, and fearfully by some of the house staff he trained. But his patients never called him that: with gratitude, they called him a healer. Hendren’s demand for technical perfection was legendary. It was not uncommon for him to undertake massive reconstruction surgeries, and if he thought that there was any imperfection after many hours of surgery, he would restart the reconstruction from the beginning without hesitation. He was driven by the mantra that his work had to last a young patient for a lifetime. Anything short of perfection was not enough.

Over two decades, Hendren built the Department of Pediatric Surgery at the MGH into an internationally renowned clinical and research center. He was enormously proud of his success in starting the MGH program. He always considered the MGH his true home.

In 1982, Hendren was named to the post once held by his mentor, Robert Gross: Chief of Surgery at Boston Children’s Hospital. During his 16 years as Chief, Hendren continued training surgeons, many of whom went on to become chiefs of surgery and pioneers at other institutions. He operated on thousands of patients, attended many associations, and was the first Robert E. Gross Professor of Surgery at the Harvard Medical School. Hendren continued with his prolific writing. He was invited to teach and operate around the world. He would do so on his own time and at his own expense, on children and adults brought to him after all local efforts had failed. He operated in over 60 different countries, regarding this as a great privilege.

In addition to training surgeons around the globe, Hendren authored over 400 scientific papers, monographs, book chapters, and books. He was also a medical photographer and filmmaker of note, having photographed for many of his articles and created 20 medical teaching documentary movies.

In 2008, the Hendren Chair in Surgery was established at the Harvard Medical School. Two Faculty Development Endowed Fellowships were established in his name, and a third as the Eleanor and Hardy Hendren Endowed Fellowship, were given to the Department of Surgery at Boston Children’s Hospital by grateful families whose children he helped surgically.

In 2012, Hendren was named the Distinguished Robert E. Gross Professor of Surgery, Harvard Medical School; Chief of Surgery, Emeritus, Boston Children’s Hospital; and Honorary Surgeon, Massachusetts General Hospital. He remained active in the care and correspondence with many, many former patients in need, always welcoming when they called or visited his home in Duxbury. He always considered operating on children a special privilege, affording the opportunity of many years of happy, healthy, and productive lives.  Among his greatest joys to the end of his life was receiving news from patients about their lives, careers, children, and even grandchildren, often made possible against long odds by his care. He had a prodigious memory for patients and their families, and often recalled minute details of their surgery performed decades earlier.

The cornerstone of Hendren’s philosophy was that knowledge and expertise gained should be widely shared, so that other health-care professionals may learn, and more patients can benefit. To honor Dr. Hendren’s strong commitment to education, a non-profit foundation, The Hendren Project, was established to serve as the memory and educational voice of the medical contributions he has made over a lifetime of clinical practice to a global audience. Established in 2014, The Hendren Project has grown dramatically in size and scope, attracting pediatric surgeons and urologists internationally. With over 5,000 regular users from 138 different countries, surgeons work with the resources of The Hendren Project to meet online through a series of virtual events, where difficult patient cases can be presented and discussed with peers and experts. The Project is now the largest educational resource of its kind for pediatric surgeons in the world.

Dr. Hendren is survived by wife Eleanor. Married for 75 years, Hendren always credited Eleanor for much of his success.  He is also survived by: Dr. Douglas Hardy and Nancy Hendren of Harrisonburg, VA; Dr. William Grant and Linda Hendren of Duxbury, MA; Dr. Robert Bruce and Dominique Hendren of Goshen, KY; Mr. David Fraser and Astrid Hendren of Medfield, MA: 11 grandchildren and 5 great-grandchildren. His only daughter, Sandra McLeod Hendren, a teacher and nurse, died of complications of diabetes in 1984.

A private service will be held at St. John The Evangelist Church in Duxbury, with plans for a Memorial Service at a future date. In place of flowers, the Hendren family encourages donations be made in Dr. Hendren’s name to The Hendren Project (https://www.hendrenproject.org/node/1261#).

A comprehensive biography of Hendren appears in the 1993 book, The Work of Human Hands: Hardy Hendren and Surgical Wonder at Children’s Hospital, by G. Wayne Miller.

A Memorial Tree was planted for W.
We are deeply sorry for your loss ~ the staff at Shepherd Funeral & Cremation Service - Kingston
Join in honoring their life - plant a memorial tree

Share Your Memory of
W.
Upload Your Memory View All Memories
Be the first to upload a memory!
Share A Memory
Send Flowers
Plant a Tree