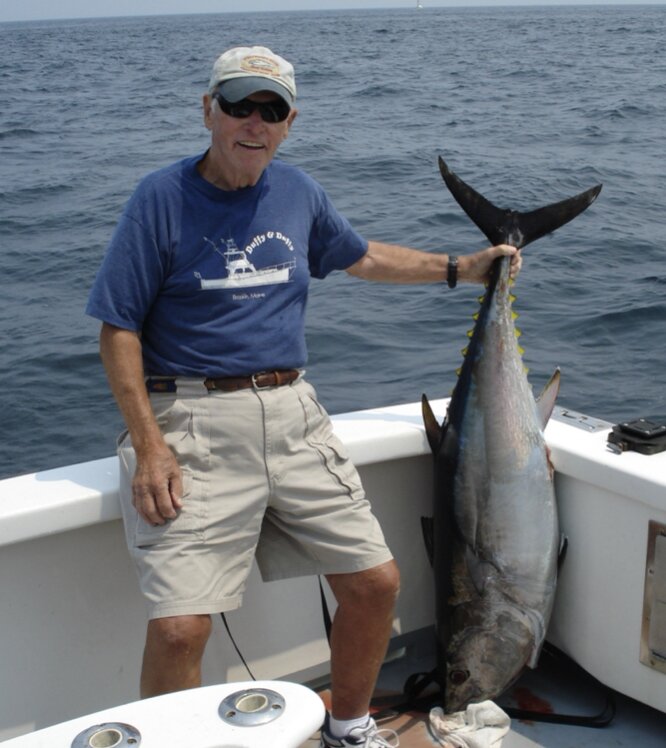 David Edward DeLory passed away, with his wife and daughter by his bedside, on January 18, 2022, at the age of 94. He was born to Henry and Cecelia (Smith) DeLory on August 15, 1927in Brockton.  He graduated from Northeastern University, thenserved in the U.S. Navy as a Fireman First Class.

David worked for Sun Oil Company for 29 years as the New England District Sales Manager.  In retirement, he continued to consult in the oil industry, reconstructed the historic Jenny Grist Mill, owned/ran the Almshouse Clock Shop, and served as President of the Plymouth Area Chamber of Commerce.

He was a keen businessman, but always had time for a good “yarn” or a good joke. David was a Jack of all trades and could figure out how to fix just about anything. And he would always be there to lend a hand to anyone in need.  He enjoyed woodworking, too, and crafted some beautiful pieces of furniture over the years.

David was also a charter boat Captain aboard his “Swan Song”,out of Green Harbor. He fished Cape Cod Bay (Stellwagen Bank), Nantucket Sound and the Atlantic.  He went on fishing trips to the Bahamas, Great Lakes and the Gulf of Mexico.  And he enjoyed his many trips to deer camp in both Maine and Pennsylvania.  There was frequently fresh fish or venison on the menu at the DeLory house!

In his senior years, David was an avid reader and enjoyed making trips to the Duxbury Fee Library where he always had a tale to tell, and a laugh to share with the kind librarians at the circulation desk. Many a good book was enjoyed by David, sitting in his recliner in the sunshine with a beloved cat in his lap.

He is survived by his wife of 70 years, Barbara DeLory of Duxbury, his daughter, Kimberly Hatton, and son-in-law Daniel Hatton, of Pembroke; and four nieces and five nephews.  A memorial service will be held in the Spring.  See www.shepherdfuneralhome.com for on-line condolences and updates on the memorial service.  In lieu of flowers we ask that donations in David’s memory be made to either the Standish Humane Society, P.O. Box 63, Duxbury, MA  02331(www.standishhumane.org), or to the Woods Hole Oceanographic Institution, 266 Woods Hole Road, Woods Hole, MA 02543 (www.whoi.edu).

A Memorial Tree was planted for David E.
We are deeply sorry for your loss ~ the staff at Shepherd Funeral & Cremation Service - Kingston
Join in honoring their life - plant a memorial tree

Share Your Memory of
David E.
Upload Your Memory View All Memories
Be the first to upload a memory!
Share A Memory
Send Flowers
Plant a Tree