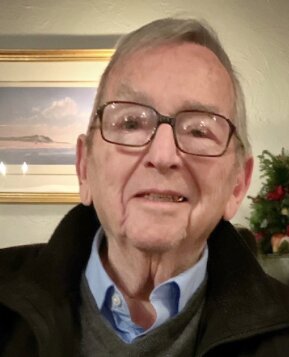 William (Bill) Gregoire Jr., 93 passed away on January 18th, 2022, at the Wingate Nursing and Rehab Center surrounded by his loving family. Bill was born and raised in Medford, Ma., graduated from Medford High School and was an accomplished athlete.  He let all know that his yearbook highlight said, "He shines in the field of sports".

Bill had an infectious smile and unmatched charisma, his personality lit up those around him.

Bill married Mary (Kenealy) Gregoire after his army service in WWII. They resided in Milton, Ma and then Kingston, Ma. He resided his last two years in Manomet, Ma with his eldest son Bill and daughter-in-law,Donna Bryant Gregoire, who provided him a loving, safe and caring environment.

Bill made his career as a Steel Salesman learning the trade with US Steel and moved up the ranks with different steel companies accruing long term clients and large volume productivity.  Bill was known for his "love of life", singing and engaging personality with everyone that knew him.  He loved nothing more than spending time with his family.

Bill was predeceased by his loving wife, Mary Gregoire of 70 years and Courtney Gregoire, his beloved granddaughter. Bill is survived  by his four children William Gregoire of Manomet, Ma,  Michael Gregoire of North Carolina, Patricia Herald of Canton, Ma. and Marianne Dryer of Manomet, Ma.  Bill was "Papa" to eight grandchildren, Brian and Jon, Brian and Courtney, Matthew and Jack and Lauren and Patrick and five great grandchildren, Joshua, Thomas and Patrick, and Olivia and William.

A memorial service will be held at the Shepherd Funeral Home followed by his burial service at the Massachusetts National Cemetery in Bourne, Ma. beside his beloved wife.  Due to the complications of Covid -19, the ceremony and burial will be private.  In lieu of flowers, the family encourages well-wishers to make donations in his memory to Tunnel to Towers Foundation which honors the sacrifice of our military and first responders who continue to make the supreme sacrifice of life and limb for our country.