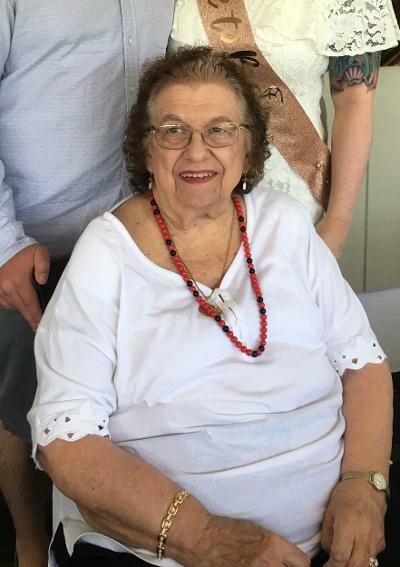 Born in Attleboro on September 26, 1935, she was the daughter of the late Arthur F. Bremilst and Mary (DeCoster) Bremilst.

Barbara was raised in Norfolk. She graduated from Walpole High School in 1953 and was a member of the field hockey team.

As a young woman Barbara worked at Commercial Assurance company in Boston. Where she met and married the love of her life, the late Kenneth R. Gay. She was a resident of Weymouth for 63 years.

Barbara loved everything chocolate and was very proud of her Belgium heritage. She kept many of her parents traditions going throughout the years and with cooking special dishes around the holidays. Barbara was an avid knitter and did crochet, and belong to a group of women know affectionally as the “Knit-wits”.

Her biggest joy in life was attending all her Grandson’s football, hockey and baseball games, throughout their youth, high school and college years. She was always their number one fan.

Beloved wife for 30 years of the late Kenneth R. Gay, Loving Mother of Robert Gay and his wife Kathleen of Kingston, loving Grandmother of David Gay and his wife Katie of Plymouth, Eric Gay and his finance’ Kayla of Kingston, Steven Gay of Plymouth, Adam Gay of Kingston and Owen Gay of Kingston. Great-grandmother of Ryland Gay of Plymouth. Barbara was also the partner of Leo McGonagle of Braintree, for many years.  She was predeceased by her brother’s Arthur F. Bremilst (wife Naomi), Robert Bremilst (wife Mary), and sister Patricia Bremilst, as well as many nieces and nephews.

Family and friends are invited to visiting hours on Tuesday January 25th , from 11AM – 12PM, in the Shepherd Funeral Home, 216 Main Street Kingston, MA, followed by her funeral service at the funeral home.

Burial in the Village Cemetery, Weymouth, has been scheduled for April.

Share Your Memory of
Barbara
Upload Your Memory View All Memories
Be the first to upload a memory!
Share A Memory
Send Flowers
Plant a Tree