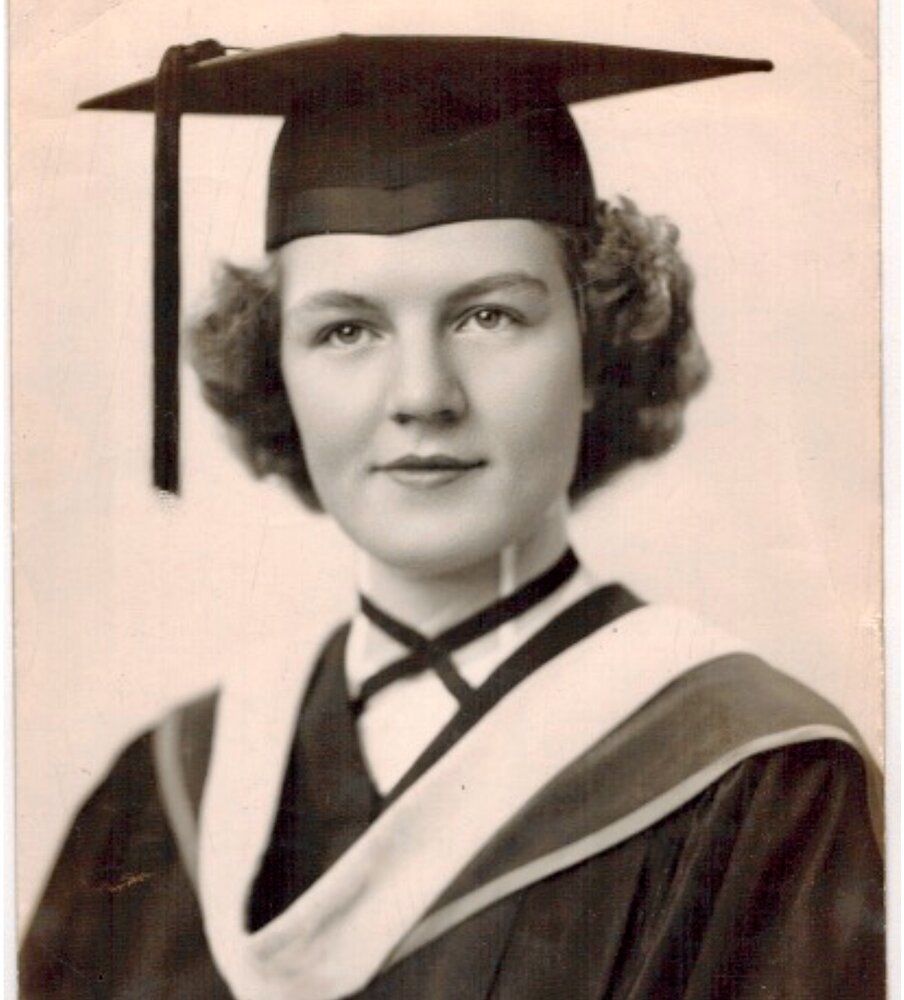 After a courageous battle with Parkinson’s, Helen J (Kelleher) Rose, 91, of Kingston entered into eternal life on October 18, 2021, the 69th anniversary of her Father’s death.  With the doctor having to travel by horse and wagon through a snowstorm, she was born at home on February 7, 1930 in Canton, MA to the late William H. and Mary E. (McNamara) Kelleher.  Growing up in Canton during the Great Depression, as one of ten children, Helen learned the value of helping others, often volunteering to walk to town to shop for groceries and shoveling snow for neighbors. She traveled by train into Boston for high school (St. Peter and Paul) and college classes.  Graduating from Emmanuel College with a B.S. in Business Administration, she subsequently worked at the Provident Institute for Savings in Boston.

In 1958, Helen married George A. Rose of South Boston.  A year later, she left her job to devote her time to raising their five children first in Dorchester, and then South Weymouth homes.  The family was the cornerstone of all that was important to her.  She cherished every moment spending countless hours doting on the children.  Every morning, at the crack of dawn, the air was filled with the sweet aroma of her cooking and baked goods, all from scratch.  Much of her time was spent knitting sweaters, hats, mittens, and slippers for her children, grandchildren, and for charity.  Helen had a passion for the outdoors, engaging her children in many activities, even leading all five children on a 30-mile bike ride to Canton to visit family, and back to Weymouth.

Helen and George spent innumerable hours volunteering at their children’s endeavors; St. Francis Xavier Parish events, teaching C.C.D., coordinating the Drum and Bugle Corps fundraising program, ballgames, and multiple sports pursuits.  She was also a Brownie and Girl Scout leader. She was a member of the Parish Sodality and enjoyed participating in musicals and plays.  Yearly summer trips were made to Nova Scotia to spend time with relatives.  The family also enjoyed other travel throughout the eastern United States and Canada.  She realized a life-long dream when she and George traveled to Ireland, visiting many villages in their ancestral land.  Helen enjoyed cultivating her garden, yard work, cooking, reading, and poetry; pastimes she prized sharing with her husband.  Writing poetry herself, she was published in the World Treasury of Great Poems.  Other hobbies included knitting, sewing, board games, crossword puzzles, and swimming.  She and George could cut a rug on the dance floor.  Together they enjoyed hosting their large extended family for all major holidays and entertaining family and friends for an annual cookout at their South Weymouth and later Kingston homes.  An avid reader, she enjoyed a good book.  In later years, Helen went to work for Tax Man in Quincy, working into her late 70’s.  She looked forward to her weekly Bingo nights until Covid restrictions shut them down.

Much of Helen’s energy was focused on helping others.  She and George lived as Gandhi would say ‘simple lives so others could simply live’.  They enjoyed shopping for and delivering much needed goods to local food shelters, and continued to be faithful visitors, never failing to take gifts to the Poor Clare Monastery in Jamaica Plain.  Together through the years, and hardly a day apart in their 62-plus-year marriage, until George’s death seven months ago, they built a church, chapels, several schools, fresh water-well projects, medical dispensaries, and shrines in Kenya, India, Ecuador, and Cameroon.  They also had several four-room houses constructed for the homeless in Ecuador.  Most recently, in her late 80’s, Helen and George established David’s Rescue Mission, a non-profit in western Kenya.  Here they had a well drilled to serve over 3000 villagers with purified water, created a program to provide goats and chickens for self-sustenance, deliver fresh vegetables and grains to villagers, built a Children’s Home for thirty children, provided electricity to the compound, and at the time of her death, had a dental and medical clinic and solar project under construction.  Helen and George also supported many domestic programs, in particular Native American Reservations in Alaska, Montana, and South Dakota.  They were also long-time benefactors to the Propagation of the Faith in Boston.

Even as she became physically frail, Helen’s good nature and sense of humor never failed her,  A most selfless, compassionate, loyal, kind, loving, and open-minded lady, she suffered silently always focusing on the positive.  Her strength of character, resilience in the face of adversity and dogged determination served her well. She will be greatly missed by the many whose lives she impacted.  Helen was most appreciative and thankful for the devoted nurses, health aides, and staff at Cranberry Hospice during the last four months of her life.

Relatives and friends are invited to attend the visiting hours Monday, October 25, from 4-8 P.M. at Shepherd Funeral Home, 216 Main St. Kingston.  A Memorial Funeral Mass will be celebrated at 10 A.M. on Tuesday at St. Joseph Church, 272 Main St., Kingston. In lieu of flowers, memorial donations may be made to David’s Rescue Mission at Coastal Heritage Bank, 83 Summer St. Kingston, MA 02364.

Share Your Memory of
Helen
Upload Your Memory View All Memories
Be the first to upload a memory!
Share A Memory
Send Flowers
Plant a Tree