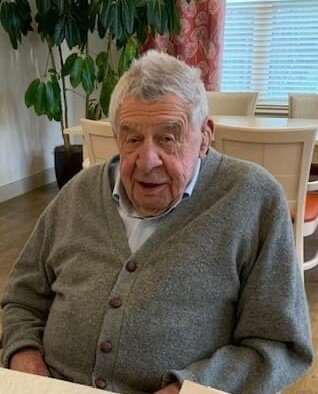 Peter T. Case of Plymouth, formerly of Duxbury and Westwood, MA passed away peacefully on September 9, 2021 with family by his side. Peter was the loving and beloved husband of the late Lucy W. Case who he had married in May 1952.

Peter, born on November 11, 1929, was the son of Robert H. and Eleanor P. Case. While growing up in Wellesley, MA he was an active member in sports and his community. A graduate and teammate of the Varsity Hockey and Lacrosse teams of Brown University, Peter served in the Korean War effort in the Air Force as a B52 tail gunner.

During his time spent in the military, Peter and Lucy resided in Texas before returning to New England to raise their family, residing briefly in Providence, RI. before settling in Westwood, MA in the mid 50’s. Peter sought after and received his Master’s Degree in Education, while attending Boston University at night, and selling insurance during the day. Upon receiving his Masters, Peter fulfilled his passion, teaching young adults. He was a beloved high school teacher and coach for over 28 years at Westwood High School.

During the summer of 1971 Peter and his family moved to Duxbury where Peter, his wife and family became active in boating, tennis and golf. He loved animals, nature, and being outdoors; often seen taking walks along the town beach.  Peter was an active member of his community serving on the Conservation Commission, coaching town youth sports and being a member of the Rotary Club. Upon retirement from teaching in the late 80’s Peter also discovered he had a knack and passion for painting and wood carving.

Peter is survived by his children; Robert S.W. Case and daughter in law Debra Lynn of Bourne, MA, Peter T. Case, Jr (predeceased), Stephen T. Case (predeceased), Elizabeth A. MacFarlane and son in law Michael W. of Kingston MA, John B. Case and daughter in law Jenny of Auburn NH, Jennifer A. Case-Pouliot and daughter in law Suzanne of Kingston MA. Peter is also survived by grandchildren Erica A. Cordeiro and her husband Perly, their children Isabella and Lucas of Bourne MA, Paul C. Case and his wife Jennifer, their children Paul Jr. and Jacob of Bourne MA, and Jason M. Case, his children Samara, Lorelei, Jason Jr. and Jaelynn of Plymouth MA, Michael W. MacFarlane Jr. (predeceased) and Kellianne E.W. MacFarlane of Kingston MA.    Peter left a legacy of giving to his community as well as to many charitable foundations and was devoted to the family library, Solomon Wright Public Library, founded by his mother-in-law Lucy B Wright of Westhampton Beach, NY and New York City.

Services for Peter will be held on Saturday September 18th at the Shepherd Funeral Home located at 216 Main St. Kingston, Ma at 10am. Burial will be private.

Share Your Memory of
Peter
Upload Your Memory View All Memories
Be the first to upload a memory!
Share A Memory
Send Flowers
Plant a Tree