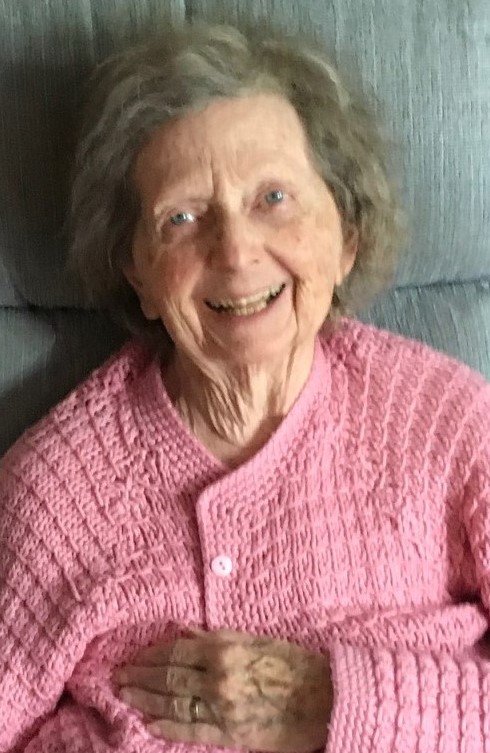 Edwina Frances St. James passed away on July 10th on her 92nd birthday at the South Shore Hospital attended by three of her sons.

Mrs. St. James is survived by her five sons, Andrew, David, Allan, Donald, Bruce and daughters in law Paula and Shirley as well as seven grandchildren and two great grandchildren. She was preceded in death by her husband of 60 years Robert Leo St. James.

Mrs. St. James graduated from Sandwich High School and received a BS Degree in Chemistry from Boston University at a time when few women were in the sciences. Known as a quiet person, she showed courage and energy in the projects that she undertook. Before her family grew larger, she was active in promoting informed voting and social groups. Avid reading, learning, and a compassion for living things were always hallmarks of her activities. She maintained more than a dozen gardens as her children matured. Music was also important to her. She played the piano in the evening, and listened to opera on Saturdays. As an excellent cook, her catalog of especially good recipes grew over the years. Major holidays were occasions for what is best described as delicious feasts. Her attachment to animals was undoubtedly encouraged early on by her treasured childhood pinto pony. She rode faster than she was supposed to, and rationalized that the adults would catch up at some point. Her favorite childhood story was of regularly carrying milk from the farm to women in town that did not get enough to eat. This theme of helping others persisted for the rest of her life. She was in a chemistry lab at B.U. when she met Bob St. James. Soon he was giving her rides back and forth to Randolph where she was living with her aunt and uncle. They were married before she graduated and began a decades long love affair of mutual devotion and admiration. She worked for many years in the family business with her husband and sons. She was devoted to her family and beloved by all who knew her. In her final years her son, Andrew, lovingly cared for her.

In lieu of flowers donations can be made to Silver Lake Chapel or MSPCA.

Share Your Memory of
Edwina
Upload Your Memory View All Memories
Be the first to upload a memory!
Share A Memory
Send Flowers