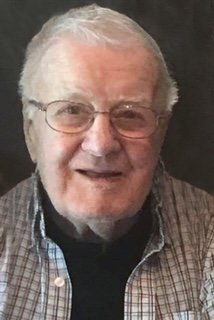 John Joseph Sheehan, Jr. of Hanson (formerly of Marshfield) passed away peacefully on June 20, 2020 at South Shore Hospital in Weymouth, MA, just eleven days prior to his 88th birthday.

He was born July 1, 1932, and was raised in West Roxbury to the late John Joseph and Mary Agnes (Hooley) Sheehan. He was a 1950 graduate of West Roxbury High School. He enlisted in the U.S. Navy and served from 1951 to 1955. He received a National Defense Service Ribbon, a Good Conduct Medal and was a veteran of the Korean Conflict Era and Peacetime.

John worked in data processing at New England Deaconess Hospital in Boston, retired and went into sales at Filene’s Department Store in Braintree where he met several close friends, whom he remained in contact with.

John enjoyed doing yard work at his home in Marshfield, playing with his Jack Russell Terrier “Corky”, spending time at Brant Rock and Humarock Beach, but mostly, spending time with his grandchildren who were the center of his world. John’s favorite things to do were to attend the many sporting events, dance recitals, and school events for each of his grandchildren. He could be heard cheering on the sidelines and clapping the loudest while attending.

John was a music enthusiast who enjoyed playing the drums, saxophone and harmonica. He was an avid Buddy Rich fan and loved anything jazz. He was a collector of music magazines and a regular customer at Dick DiCenso’s Drum Shop in Quincy.

Arrangements made by Shepherd Funeral Homes in Kingston, where private family services will be held.

The Family of John Joseph Sheehan, Jr. would like to thank the staff of All American Assisted Living at Hanson for the tremendous care John received during his five years of residency.

In lieu of flowers, donations in memory of John Joseph Sheehan, Jr. may be made to the Alzheimer's Association at

Share Your Memory of
John
Upload Your Memory View All Memories
Be the first to upload a memory!
Share A Memory
Send Flowers