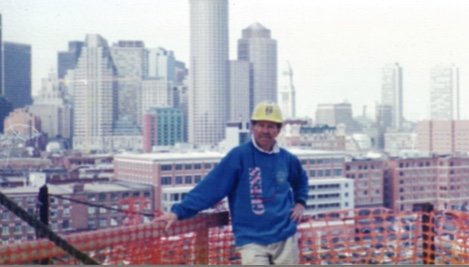 Andrew Gatturna, 75, of Duxbury MA passed away in the early morning of Sunday, September 29th. For 26 years he lived with a rare and progressive bone marrow disorder, but he did not easily give up the things he loved to do, including working as a commercial mason. He was a member of the New England Local 3 Chapter of Bricklayers and Allied Craftsmen Union.

He enjoyed driving out-of-town company around Boston and pointing out the buildings he had worked on. “I built that,” he’d say, and then admit, “Well, I had a little help.” When his illness forced an early retirement, he spent time at his summer home on Cape Cod and took up golf. Eventually he had to give up his golfing, but Andy was an avid reader and his home library grew. He read all of John Steinbeck’s works and Lee Child was a favorite mystery and adventure writer. He also read extensively about nature and space exploration.

Andy was treated at Dana-Farber and participated in several drug trials, including one that resulted in a new medication that was the first to treat, but not cure, myelofibrosis.

Andy was the son of Roland Gatturna and Katharine O’Leary. He is survived by his wife of 44 years, Joan, his sister, Theresa Egan, his brother, Ron Gatturna, and several nieces and nephews.

A memorial celebration of Andy’s life will be held on November 9, 2:00 p.m., at Shepherd Funeral Home, 216 Main Street, Kingston, MA.

Gifts may be made to Dana-Farber Institute in memory of Andrew Gatturna to support cancer research and patient care at Dana-Farber Cancer Institute, P.O. Box 849168, Boston MA 02284 or via dana-farber.org/gift.

Share Your Memory of
Andrew
Upload Your Memory View All Memories
Be the first to upload a memory!