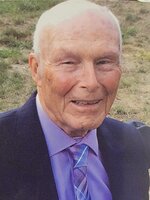 Dr. Richard Everett Wonkka (“Dick”), age 90, of Pembroke, MA, passed away peacefully on April 4, 2022, at home, surrounded by his loving family. Dick was born on February 11, 1932, in New Haven, CT, to Waino and Helmi (Pearl) Wonkka, whose families emigrated from Finland. He grew up in Fitchburg and Leominster, MA, among many other Finnish families in that area, and the Finnish culture was very important to him all his life. He graduated from Leominster H.S. in 1951, where he was very proud of scoring the winning touchdown at the Thanksgiving Classic football game. With the influence of his involvement in the youth group at the Baptist Church, Dick met the president of Alderson-Broaddus College in Philippi, WV, who was instrumental in his decision to attend college there. While at A-B, he played basketball under Coach Rex Pyles and was part of the team who traveled to Kansas City in 1955 for the NAIA championships. He majored in chemistry, worked as a lab assistant, sang in the A-B touring choir, and was a founding member of the Silver Key Honor Society . He loved everything about the college and came to love the mountains, beauty, and people of West Virginia.

After graduating magna cum laude in 1955, Dick returned to New England to attend the University of Maine at Orono for graduate studies. Here he became reacquainted with Priscilla Pfeiffer, a music major at UMaine, whom he had previously met at the Baptist Youth Camp at Ocean Park, Maine. They fell in love and married in 1956, and moved back to Philippi, WV, where Dick began teaching chemistry at A-B.  There, in 1957, they welcomed their first child, Debbie, followed by Karina, Bonnie, and Steve over the next 10 years. Dick continued his graduate studies, and he earned his master’s degree at Dartmouth College in NH, in 1960. The next 5 years he spent teaching and pursuing his doctorate. In 1965 they returned to A-B College, where he taught chemistry to nursing, Physician Assistant, and pre-med students, as well as general physical science courses. He also played basketball with other faculty members and enjoyed keeping the clock for the A-B Battlers basketball teams.

In 1969 Dick moved the family to Charlottesville, VA, where he received his Doctor of Science Education degree from the University of Virginia in 1971. His higher education completed, the family then returned to Philippi, WV, where he resumed his well-respected teaching career at A-B College (now A-B University.) There the family bought their first house on a hill overlooking the town of Philippi and the Tygart River. There were many family camping trips with a pop-up trailer Dick built himself, towed by a series of VW microbuses. They even took a cross-country camping trip to California to see relatives. There were also vacations to the beach, and trips back to New England to see their extended families. Dick and Priscilla were also thrilled to travel to Finland twice to connect with Dick’s relatives there. As the children completed college they gravitated to jobs in Massachusetts, where they had so often spent summers. Dick and Priscilla bought a camping trailer and traveled to MA in the summers to be closer to their children and help to care for grandchildren. Dick taught courses at Cape Cod Community College for 25 summers and spent a lot of time on building and renovation projects with his sons-in-law at his daughters’ homes and on some cottages  where the family stayed.

Upon retiring in 1996 Dick and Priscilla bought a home in Plymouth, MA, and he began a “retirement job” putting together bikes at Benny’s. They began to spend winter months in Fort Myers Beach, FL, first in their camping trailer, then in a home in a retirement community. They enjoyed 22 winters there, making many good friends. Dick enjoyed bowling, playing pool, bocce, and competing at horseshoe tournaments. In 2012, they bought a condo in Pembroke, MA, where they have lived with their youngest daughter Bonnie, who has been their major caregiver in the last few years. They became active members of The Pilgrim Church of Duxbury, where Dick played in the bell choir with Priscilla, Bonnie, and Steve. Dick also loved playing pool and bocce at the Duxbury and Marshfield Senior Centers. He also enjoyed swimming, visiting the beaches of Ocean Park, ME, Duxbury, and Cape Cod with his children, grandchildren, and more recently, his greatgrandchildren.  Dick loved watching sports, playing cards and games with family and friends, and most of all, loving his family and his wife of 65 years so deeply. He was an amazing inspiration and showed to all his children and grandchildren what an incredible husband, father, and grandfather should be. He demonstrated the Finnish concept of “SISU”, which means perseverance, tenaciousness, and fortitude.

He is survived by his wife, Priscilla, and children: Debra Palfrey, Karina Ryan, Bonnie Wonkka, and Steven Wonkka and his wife Kate; his grandchildren (to whom he was Grampa or Papa): Adam Ryan (wife Vanessa), Eric Ryan (wife Erica Gornstein), Christopher Palfrey, Emily (Palfrey) Montgomery (husband Brian), Hannah (Palfrey) Chiert (husband Spencer), Julia Wonkka and Josh Wonkka; as well as his greatgrandchildren: Azalea Ryan, Ella Gornstein Ryan, Lena and Jackson Montgomery, and Naomi and Mea Palfrey (and their mother Mirva Palfrey) of Finland. He is also survived by his brothers Carl Ojala and wife Ginny of Minnesota, and Laurie (“Butch”) Ojala and wife Nona of Leominster, MA, and several nieces and nephews. He was preceded in death by his parents and his brother Robert Waino Wonkka.

Family and friends will gather for Visitation on Sunday, April 24, 2022, from 2-5 pm at the Shepherd Funeral Home, 216 Main St., Kingston, MA, and a Celebration of Life service will be held on Saturday, April 30, 2022, at the Pilgrim Church of Duxbury at 11:00 am with a reception/light luncheon to follow at the church fellowship hall. In lieu of flowers, donations may be made to the Annual Fund at Alderson-Broaddus University, 101 College Hill Dr., Philippi, WV, 26416; Pilgrim Church, 404 Washington Street in Duxbury, MA, 02332; or the Alzheimer’s Association. Dick’s family would like to extend their deepest gratitude to his wonderful caretakers in his last few weeks at Beth Israel Deaconess Hospital-Plymouth, Cranberry Hospice, and the home health aides from KML Complete Homecare Services.

For more information or to offer condolences, please visit http://www.shepherdfuneralhome.com/tribute